LOCATION: Brooklyn Bridge Park
This exhibition is not held at the Bronx Documentary Center

The Photoville Festival returns for a ninth year in a different way – online community and artist programming plus photo exhibitions in public spaces throughout New York City.

Through photos, words, and multimedia, our exhibition, Trump Revolution: Climate Crisis, documents the current president’s overturning of decades of American environmental policy, its profound effects on American society, and our planet at large.

This is the second in a year-long series of Trump Revolution exhibitions examining America’s societal and political transformation, one whose speed, reach, and consequences are unmatched in our country’s history. View the virtual exhibition at trumprevolution.org 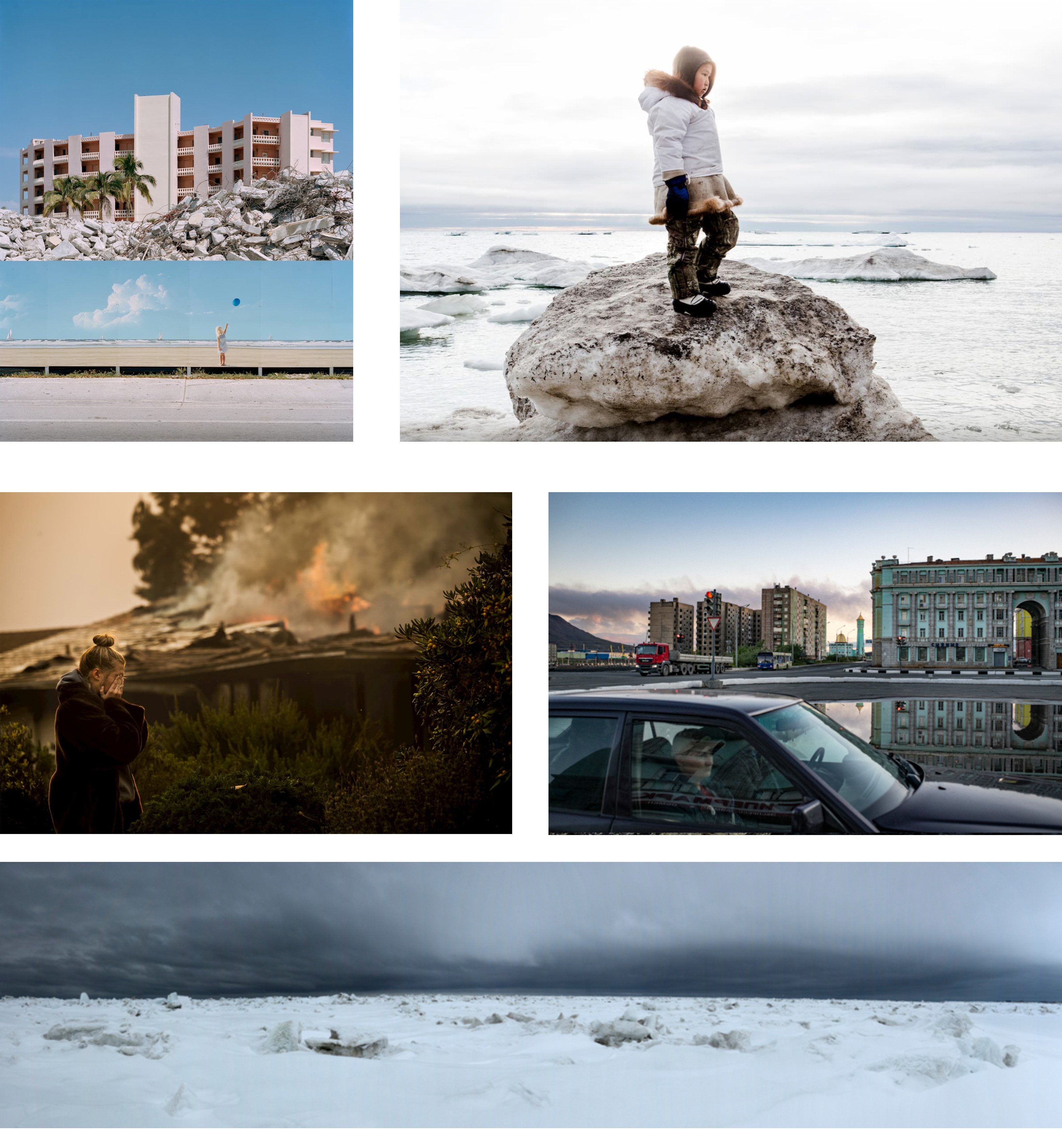 Working within the documentary tradition, STACY KRANITZ makes photographs that acknowledge the limits of photographic representation. Her images do not tell the “truth” but are honest about their inherent shortcomings, and thus reclaim these failures (exoticism, ambiguity, fetishization) as sympathetic equivalents in order to more forcefully convey the complexity and instability of the lives, places, and moments they depict. Kranitz was born in Kentucky and currently lives in the Appalachian Mountains of eastern Tennessee. Her work has been written about in the Columbia Journalism Review, British Journal of Photography, Journal of Appalachian Studies, Time, The Guardian, Juxtapoz and Liberation. In 2015 she was named Time Magazine Instagram Photographer of the Year and in 2017 received a grant from the Michael P. Smith Fund for Documentary Photography. In 2019 she was shortlisted for the Louis Roederer Discovery Award and presented an exhibition of her work at the Rencontres d’Arles. Her first monograph, As it Was Give(n) to Me, will be published by Twin Palms. She is a current Guggenheim Fellow.

Born in The Netherlands in 1963, KADIR VAN LOHUIZEN started his career as a photo-journalist in 1988 by reporting the Intifada. During the mid-1990s, he covered conflicts in Africa and the aftermaths of the dissolution of the Soviet Union. He is best known for his long-term projects documenting seven rivers of the world, which he roamed from source to mouth. He also documented the rising of sea levels and its consequences, the diamond industry, the post-Katrina period in the USA, violence against women, and migration in the Americas. Kadir has received numerous prizes and awards in photojournalism. His environmental project ‘Wasteland’ won the first World Press Photo Prize in the Environmental category. In 2018, he was the co-laureate with Yuri Kozyrev of the 9th Carmignac Photojournalism Award, which supported the production of ‘Arctic: New Frontier’, their double polar expedition documenting the consequences of the climate crisis. Kadir van Lohuizen is a frequent lecturer and photography teacher, based in Amsterdam.

As a photojournalist for the past 25 years, YURI KOZYREV (Russia, 1963) has witnessed many world-changing events. He started his career documenting the collapse of the Soviet Union, capturing the rapid changes in the former USSR for the L.A. Times during the 90s. In 2001, Yuri Kozyrev started to cover international news, working in Afghanistan and Iraq as a photographer for TIME Magazine. Since 2011, Yuri Kozyrev has been documenting the “Arab Revolutions” and their aftermaths in Bahrain, Yemen, Tunisia, and specifically in Egypt and Libya. Since 2015, he covers the conflict in eastern Ukraine, the rise of Russian nationalism, and the migrant crisis in Europe. Yuri Kozyrev has received numerous honors for his work, including several World Press Photo Awards, the OPC’s Oliver Rebbot Award, the ICP Infinity Award for Photojournalism, the Frontline Club Award, the Visa d’or News and the PrixBayeux-Calvados, and was named 2011 Photographer of the Year in the Picture Of the Year International competition. In 2018, he was the co-laureate with Kadir van Lohuizen of the 9th Carmignac Photojournalism Award, which supported the production of ‘Arctic: New Frontier’, their double polar expedition documenting the consequences of the climate crisis.

BRYAN THOMAS is a Brooklyn-based photographer and a recent finalist for The 2019 Arnold Newman Prize For New Directions in Photographic Portraiture. Bryan graduated from Dartmouth College and worked at GQ Magazine before earning his Master of Arts at Ohio University's School of Visual Communication. His most recent body of work, “Sunrise/Sunset,” was featured in 2019’s PDN Annual, awarded the Daylight Photo Award, and exhibited at The Aperture Foundation and The Griffin Museum of Photography. Bryan’s self-published zine, “The Sea in the Darkness Calls,” is held in the libraries of the San Francisco Museum of Modern Art, the Amon Carter Museum of American Art, and the Museum of Fine Arts Houston. His work has been recognized by PDN's Photo Annual, American Photography, and the NPPA's Best of Photojournalism as well as exhibited at The Museum of The City of New York and The Getty Images Gallery in London. Bryan is a regular contributor to The New York Times and has been published by TIME, The New Yorker’s Photo Booth, Bloomberg Businessweek, Topic, The Intercept, The Wall Street Journal, Los Angeles Times, CNN, National Public Radio (NPR), PBS’s Frontline, Harper’s Magazine, Newsweek, WIRED’s Backchannel, The Guardian, The Chronicle of Higher Education, BuzzFeed, and Harper Collins, among others.

KATIE ORLINSKY was born and raised in New York City and began her career as a photographer thirteen years ago. She has photographed all over the world documenting everything from conflict and social issues to wildlife and sports. For the past five years, Katie’s work has focused on climate change, exploring the transforming relationship between people, animals and the land in the Arctic. Katie is a contributing photographer with National Geographic and work is frequently published in The New York Times, The New Yorker, and Smithsonian Magazine among others. She has won numerous awards over the course of her career from institutions such as the Art Director’s Club, PDN30, Visa Pour L’image and Pictures of the Year International. She was the 2016 Getty Images Grant for Editorial Photography winner and the 2016 Paris Match Female Photojournalist of the Year. She received a Masters's degree in Journalism from Columbia University, and in 2018 was named the Snedden Chair of Journalism at the University of Alaska Fairbanks.

MARCUS YAM is a Los Angeles Times staff photographer. Born and raised in Kuala Lumpur, Malaysia, he left a career in aerospace engineering to become a photographer. His goal: to take viewers to the frontlines of conflict, struggle and intimacy. In 2019, Marcus was awarded the Robert F. Kennedy Human Rights Journalism Award for his intimate body of work documenting the everyday plight of Gazans during deadly clashes in the Gaza Strip. Marcus was part of two Pulitzer Prize-winning breaking news teams that covered – tragic San Bernardino, Calif. terrorist attacks in 2015 for the Los Angeles Times and the deadly landslide in Oso, Washington for the Seattle Times. His other work has also earned the Scripps Howard Visual Journalism Award, Picture of The Year International’s Newspaper Photographer Of The Year Award, Society of Professional Journalists Sigma Delta Chi Award and a National Headliner Portfolio Award. Prior to the Los Angeles Times, Marcus was based in New York and worked as a regular contributor to The New York Times. His most notable work includes his contributions to The Times's three-part multimedia series, "Punched Out: The Life and Death of a Hockey Enforcer," and "A Year At War," a Times series that included his feature short film, "The Home Front," which have earned him numerous accolades, including an Emmy Award, a World Press Photo multimedia grand prize, a Picture of the Year International Multimedia Award, a DART Award for Trauma Coverage and a Alfred I. duPont-Columbia University Award.

HEADER IMAGE: April 2017, Louisiana. Georgia-Pacific’s Port Hudson facility is owned by the Koch brothers and located in Zachary, La., just north of Baton Rouge. The mill is known to release cancer-causing toxins. The chlorine used in the manufacture of paper towels and other Koch products produced at this plant have the potential to endanger 230,263 nearby residents. © Stacy Kranitz